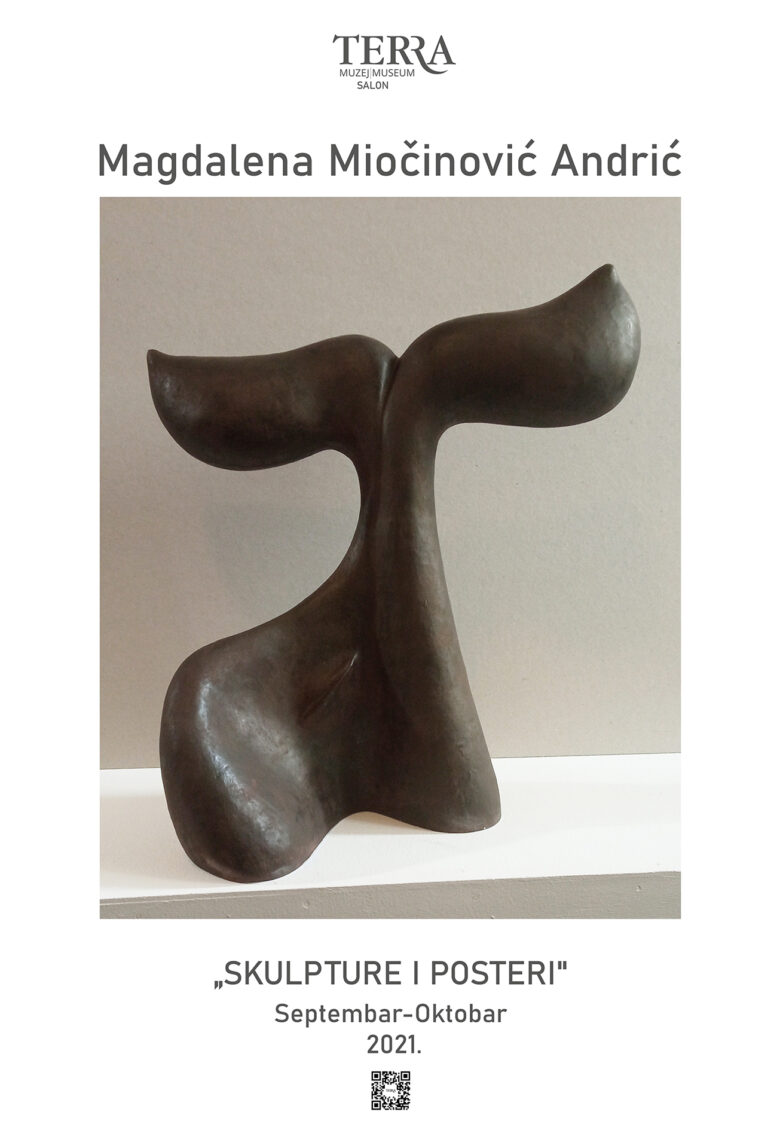 On Saturday, September 18, a solo exhibition of sculptures and drawings by the academic sculptor from Belgrade, Magdalena Miočinović Andrić, was opened in the salon of the Terra Museum.

I decided to do an advertising campaign for them. They are objects, but not mere objects. As John Berger says in his Portraits, speaking of Henry Moore:
“An artist creates a representation of something. An object is simply what it is. The performance associates and speaks of something that is not itself. The craftsman is primarily interested in the thing he makes; the artist is primarily interested in his vision, which a once made thing must express.”
They are sculptures, they express, they are something other than their appearance. This is difficult to accept today in the twenty-first century. Today, everything is in the blink of an eye. Today, commercials are changing, flashing imposed exposures.
My so-called advertising campaign is through posters presenting sculptures. If these were large billboards placed noticeably everywhere along the main roads, the random glances of passers-by – the undecided audience – would accept them as they reportedly did, so that the sculptures themselves, the embodiment of the artist’s (my) vision, would become what they are. the core of the concept to which the exhibited images refer.

Magdalena Miočinović Andrić was born on October 7, 1972, in Belgrade.
During his studies of philosophy (1991/95), he began his artistic work by participating in the theater workshops of the KUD – NIKUD troupe.
She works on scenography, making posters, and designing creative workshops.
In 1998, she enrolled in sculpture at the Faculty of Fine Arts in Belgrade, where she graduated in July 2003. During her studies, she was twice awarded the annual prize of the Faculty of Sculpture in Material – for sculpture in wood and sculpture in metal.
She has been a member of ULUS since February 2004 and ULUPUDS since 2012 and holds an independent artist status since 2006.
So far, she has participated in more than 40 group exhibitions, four international sculpture symposia and has had twenty-two solo exhibitions at home and abroad.
She lives in Belgrade with her husband and three children.
You can see more about her work so far at:
www.magdalenamiocinovicandric.weebly.com

The exhibition is open until October 9, the working hours of the Terra Museum salon are from Tuesday to Saturday from 10 am to 4 pm.

On Friday 8. oct.  in the salon of the museum Terra was open art exposition by academic artist from...

On Saturday, September 18, a solo exhibition of sculptures and drawings by the academic sculptor fro...

Sanja Radusin – ,,From clay to terracotta”

Nikola Macura – From noise to sound

On Saturday, May, 15th at the Museum of Terra hosted the solo exhibition and art performance of an a...