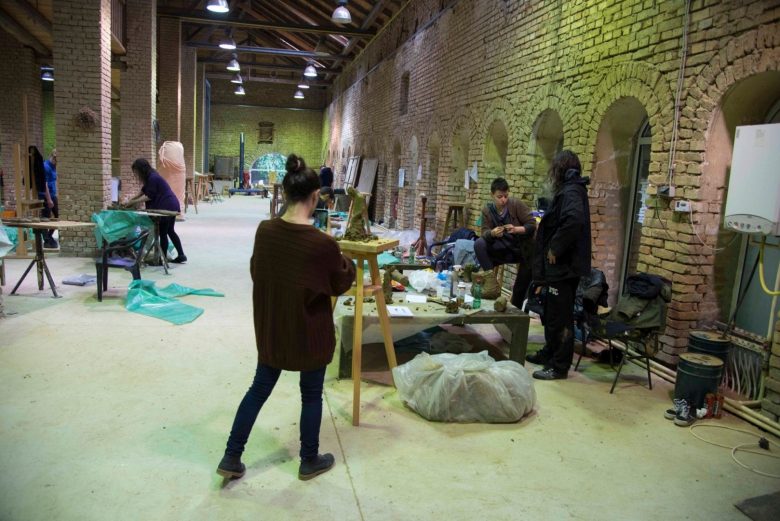 The Terratory Project brought together artists/students of art academies from Belgrade, Trebinje and Cetinje, Beaujeu-Arts from Paris, Accademia Di Belle Arti from Florence, Academy of Arts from Thessaloniki, Academy of Fine Arts from Timișoara, faculties of applied arts from Rijeka and Maribor, University of Applied Arts from Vienna and the Lasalle College of the Arts from Singapore.

Within this project, in the period from 2007 to 2014, in May of each year, the Terra Atelier became a meeting place for these young artists and art students.

Project Terratory was organized and implemented through the cooperation of the Centre for Fine and Applied Arts – Terra from Kikinda, the Municipality of Stari Grad (Belgrade), and the Faculty of Applied Arts from Belgrade. Project coordinator Marko Lađušić implemented the main idea of the project that was related to individual perception expressed through sculptures integrated into urban spaces.

Project Terratory was implemented as an accompanying programme of the Belgrade Summer Festival BELEF, during which terracotta sculptures were exhibited at several prominent locations in Belgrade (fountain on the Republic Square, fountain on the plateau in front of St. Sava’s Temple, BELEF stage in the courtyard of the Fifth Belgrade Grammar School). City fountains are organically connected with sculptural solutions, and that was the motif connecting all the exhibition displays.

Within the TERRATORY – THE ART OF GIVING Project of the BELEF Centre, the Belgrade Drama Theatre received a donation in the form of six exhibition items that were created in the Terra Atelier during Terratory 2011, which are now on permanent display in the theatre lobby.

In the process of recultivation of the Ada Huja picnic area in Belgrade, some of the sculptures created during the Terratory Project were set up as a permanent exhibition.

On the one hand, the goal of the Terratory Project during the seven years of its existence was to provide a once-in-a-lifetime opportunity for students and artists of the younger generation to sculpt large-scale sculptures in terracotta.

The goal of the project was also to place a mark on open-air urban locations and show them in an artistic context.

Our plan is to launch courses for art lovers from all over the world who wish to try their hand at ...