“The earth will be fertilized by the residues of the future. Perhaps the melting winter ice, mixed with the heat of relentless bodies that make love until they fall into the ice lake, will contribute to the understanding of the moment. ” (T.Loginović, Magnificent ruins, in Women, pictures, fabrications, arranged by Branka Arsić, Center for Women’s Studies, Belgrade, 2000)

Jana Stojaković does not only cease to amaze us, but with each successive series of works, she seems to map the phenomena of the modern world with unmistakable artistic radar. Her art is engaging, ironic, dark-witty and, above all, critical, cautionary and not overly optimistic. An active participant in the production of a critical element of culture, in a form that certainly does not leave indifferent, this artist fearlessly and uncompromisingly confronts the greatest demons of today: the survival of the planet, in the physical and moral sense, the values of the modern world and the conditions of the new normality of homo consumericus[1]. Beauty of Modified Nature series is a visual narrative of just such a “normalized” order of an altered reality. Because, we are in a “continuous consummation desynchronized and hyper-individualistic cosmos in which no age category can escape the marketing segmentation strategies, and where anyone can choose their own timetable, reshape their appearance, arrange a lifestyle.”[2] Although society has never been richer, it still has misery and poverty; despite of the fact that the living conditions are better and the life span is getting longer, the fear of ageing and illness is growing, we are becoming more concerned and trying to secure ourselves – the pursuit of a healthy life, natural appearance and inner harmony of the individual simultaneously exist with the increasing insecurity and anxiousness, while with the claims of many to be happy, stress, depression and anxiety are on the rise. All these are just some of the aspects of paradoxical happiness. The cow is a body of hyper-consumption, a double milking, people that produce and consume, it is milked even when there is almost nothing left, just ribs and bones. Is this condition sustainable and until when? The author of this exhibition does not have a rosy picture of the future and her collage – fables confirm that, unfortunately, we are “only at the beginning of a hyper-consumer society, because for now nothing can stop or even slow down the accelerated progress of commercialization of experiences and lifestyles.”[3] The winged apes of the evil witch in the movie The Wizard of Oz, appear here as an intrinsic element of a turbo-consumer society that morally distorts and degrades, glorifying superficial, instant pleasures…. Apes represent rapacious, disgruntled and angry people. Spider’s tentacles grow instead of their wings, drool run out of their mouths as they tread the false golden path of garbage – coffee and chocolate, the endless path of hedonism. A symbolic presentation of nature itself, sick and covered with tumors, infected and neglected, is displayed in the form of a deer, while the newborn, with claws and tail, announces a new type of people – wild, cannibalistic. On the drawing with the bird, oil, by which this unfortunate animal is covered, bears the twofold symbolism: the most wanted resource, which directly produces power, simultaneously affecting nature, actually, the planet exposed to ecological disruptions and disasters. A white bear in an ice-free sea, on a pile of floating garbage, is a symbol of modern man with no stronghold, who is unable to cope with the new circumstances. Deprived of his support in a broken patriarchy, he has yet to prove himself as a man. He will not become one, unless he gets financial confirmation of his gender identity. With growing insecurity, there is increasing doubt about his own masculinity, which has far-reaching consequences that affect the entire economy of interpersonal relationships, especially love. A middle-class white heterosexual male is cast out, and yet again, protected, just like white bear. He becomes an endangered species that fights for survival, by all means. On the other hand, female sexuality is shaped according to male desires, and the character of a pig – a girl distorted by cosmetics and served to a man on a tray, is another confirmation of the paradox of modern society. Although masculinity is threatened, the flesh of female sexuality is served the to the male gaze.

In addition to social issues, often ignored by the public view, such as experiments and drug testing (lab rat), the focus of the exhibition are also the problematic topics of today – alienation due to the expansion of IT consumption, alongside with the problem of “brain drain” and production of generations who are “neither here nor there”. The dog is a representation of such a persona, hungry for love, intimacy, exchange, emotions, while Chernobyl calf uncertainly resides between East and West. A small trail of hope for the salvation of mankind is revealed through the work with a cat, who, as a territorial animal, remains as the guardian of the planet. 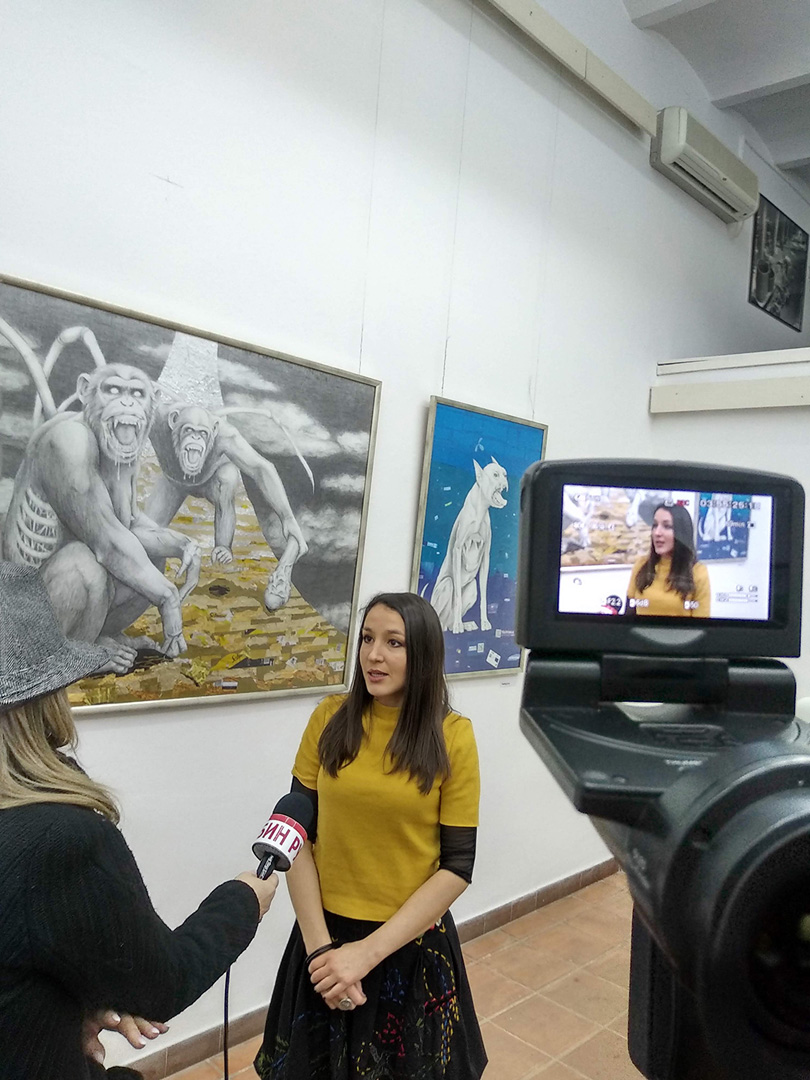 Milorad Dagović – Dago  TRACES OF IDENTITY born in Užice. He graduated from Art School in Saraj...

An exhibition of sculptures by Marija Jeftić Dajić – “Ritual Inclusion” – ...

An exhibition of paintings, by Mila Guardiol entitled ,,QVO VADIS” opened at the Terra Gallery...

An exhibition of paintings, drawings and art books by Teodora Rakidzic entitled “Architecture ...